Old Cirro vs New Cirro: What has changed?

I was a heavy smoker for many years before I started vaping, I knew nothing about e-liquids when I started and came across Cirro by chance in a local shop near my house after trying a few other brands that I didn’t take to. I thought the Cirro Regular Tobacco would be the best choice for me as I was trying to quit smoking.

The Regular Tobacco flavour was really enjoyable and my personal favourite, the levels of nicotine available really helped with my cigarette cravings. I had a good thing going with Cirro and have been a loyal customer for years now, but I’ve noticed some changes recently and unfortunately they aren’t changes I like. I thought it was just me at first, maybe I’d picked up a dodgy batch, but my girlfriend is also a Cirro user, her favourite flavour is Cherry Bomb, and when she purchased her recent bottle she noticed differences in that liquid too, so it must be across all the flavours. The overall quality of the product has significantly dropped but there are a few notable changes we have seen between the old Cirro and the new Cirro we wanted to mention.

The first main change is to the flavours. Regular Tobacco has a distinctive taste and changing that effects the entire vape for me. Also, with my girlfriends Cherry Bomb she said it used to be like a delicious burst of cherry but now that lovely juicy flavour is not there as much anymore. With the Cherry Bomb you can tell the difference in the colour, the old Cirro Cherry Bomb liquid was red in colour but the new one is clear as you can see in the above image with the old bottle on the right and the new on the left. This speaks volumes to the difference in taste quality as well. You can also see the difference in the bottle designs, another feature they did not tell us about.

Also, the difference in PG/VG ratio has changed the quality of vape delivery as well as the flavours. The balance used to be just right to give you the best vapour production, throat hit and taste but now it is not as nice. With such large-scale differences in the actual liquids, you would have thought they would give the consumers a prior announcement about what they were doing but they didn’t, they subtly and almost sneakily made changes and have ultimately let themselves down as well as their loyal customers like us. 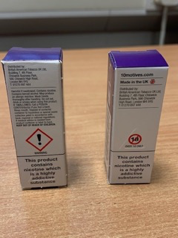 If you look at the above images you will see the two cartons side by side, the new on the left and old on the right. The old one has the Union Jack symbol and says that the products are made in the UK whereas the new one doesn’t. However, this contradicts the other image which is from the Ten Motives website and states that Cirro e-liquids are manufactured in the UK. If that wasn’t a big enough error Ten Motives actually discusses the fact that Cirro have moved their manufacturing elsewhere in their newsletter.

Why are Cirro being so low-key about the changes they have made and not spoken to their customers directly? Maybe they know that consumers won’t respond well to that decision and prefer the old flavours and quality in the previous e-liquids.

The above images are of the card that comes inside the new Cirro cartons that hint at the new changes to the e-liquids by saying “recrafted e-liquids for greater taste”. We are given no further explanation apart from this lazy phrase and a subpar e-liquid and flavour that we weren’t expecting when we bought it. I didn’t want to have to start looking for another brand as the other ones I have tried before I haven’t liked as much as Cirro but I can’t keep using an e-liquid I know longer enjoy.

46 Responses to " Old Cirro vs New Cirro: What has changed? "